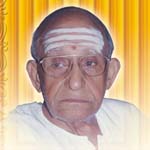 Semmangudi Radhakrishna Srinivasa Iyer (Tamil: செம்மங்குடி ஸ்ரீனிவாச ஐயர்) (July 25, 1908 - October 31, 2003) was a Carnatic vocalist. He was the youngest recipient of the Sangeetha Kalanidhi awarded by the Music Academy in 1947 and has received many awards including Padma Bhushan and Padma Vibhushan from the Government of India, Sangeet Natak Academy award (1953), Isai Perarignar from Government of Tamil Nadu and Kalidas Samman from Government of Madhya Pradesh. He was affectionately addressed as "Semmangudi Maama" (Semmangudi Uncle) by his disciples. He was also considered the "Pitamaha" or the grand sire of modern Carnatic Music. He was conferred with an honorary doctorate by University of Kerala in 1979. More....